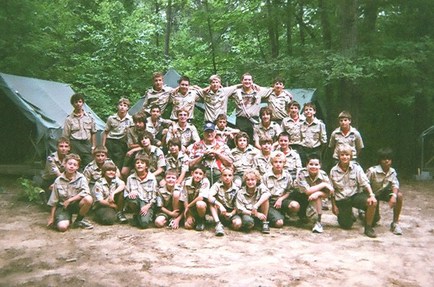 Scouting Family,
It is with a heavy heart and great sadness that I report the passing of Scoutmaster Emeritus Mr. Jesse Lee Everidge, Jr.  Mr. Jesse was a great friend and fellow Scouter to us all and will be deeply missed.  Please keep the Everidge family in your prayers.
Scoutmaster Billy


Scouts, Scouters and Friends,
The passing of Scoutmaster Emeritus Jesse Lee Everidge, Jr. has left all of us with deep feelings of loss.  We all will miss his many attributes and character traits that made him a positive role model to his family and friends, church and neighborhood communities and especially the Boy Scout program.

The funeral arrangements are as follows:
On Tuesday May 28, 2013 from 5:00 PM until 8:00 PM a visitation for family and friends will be held at the McEwen Funeral Home Mint Hill Chapel. A Boy Scout Court of Honor (Memorial Service) to honor Scoutmaster Emeritus Jesse Lee Everidge, Jr. will be held at 7:00 PM in the McEwen Funeral Home Chapel. On Wednesday May 29, 2013 at 2:00 PM a funeral service will be held at the McEwen Funeral Home Mint Hill Chapel followed by burial with Military Honors at Sunset Memory Gardens on Lawyers Road in Mint Hill. ALL SCOUTS AND SCOUTERS are strongly urged to attend the visitation and Court of Honor.  Although Wednesday is a school day, scouts are encouraged to attend the funeral with parent’s permission.  ‘Mr. Jesse’s’ family is fully aware of the impact he had on the lives of many Scouts and Scouters and encourages them all to attend in uniform. On Tuesday all Scouts and Scouters please assemble outside at the rear of McEwens at 6:30 PM.  Color Guard and Honor Guard assignments will be made.  Please arrange to visit with the family prior to or after the Court of Honor. The uniform for both Tuesday evening and Wednesday afternoon will be as follows: Full ‘Class A’ Dress Uniform (clean uniform with long pants, Merit Badge Sash or OA Sash (if an OA Member).  No tennis or athletic shoes.  Be the “PRIDE OF 65’.

Please continue to keep the Everidge family in your thoughts and prayers.

Jesse Lee Everidge, Jr., 86, died in his Mint Hill home on Wednesday, May 22, 2013. Visitation will be on Tuesday, May, 28, at 5:00 pm, and funeral service will be held at McEwen Funeral Service – Mint Hill Chapel, Mint Hill, NC, on Wednesday, May, 29, at 2:00 pm.
Devotion and generosity colored every aspect of his life. The son of Jesse Lee Everidge and Nina Green, Jesse was born in Columbia, South Carolina, on December 11, 1926 and was raised with his brother, Jack, by their mother in Charlotte after their father died. A devoted son and patriot, he enlisted at 17 years old, and served his country in the Navy. He returned home to Charlotte and met Mary Grace Taylor (Grace), and they married on July, 19 1946. They worked together at Rexam, Inc. in Matthews, and raised their son, Jesse Lee Everidge, III (Lee) in Mint Hill. He served the Boy Scouts of America, Troop 65 from the 1960s until his death. Troop 65 honored Jesse in 2012 by dedicating their hut in his name. He was a member of Oakhurst Baptist Church, Charlotte, where he also served as Deacon. Jesse is predeceased by his wife, Grace, son, Lee, and great-grandson, Nathan Cantrell. He is survived by his brother, Jack Everidge of Charlotte, grandchildren, Kelli Everidge of Charlotte, Rachel Everidge of Boulder, Leah and Matthew Cantrell of Rock Hill, and great-grandchildren Hannah, Sarah, Naomi, and Nahum Cantrell.
In lieu of flowers, please consider making a donation to Boy Scouts of America, Troop 65.
All trips are subject to change due to weather, scout attitude and availability of adult supervision.